A Brewery Rooted in the West End

A Brewery Rooted in the West End 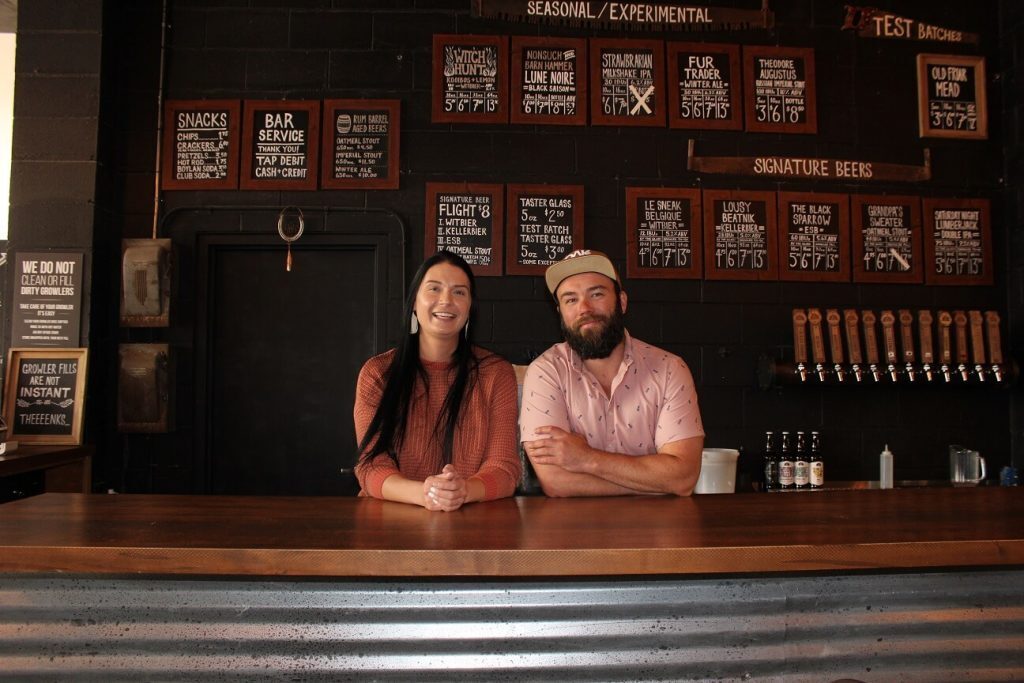 Here’s a math question for you:

It may seem like an unlikely combination to start a brewery, but at Barn Hammer Brewing (595 Wall St) it’s working marvelously. According to Sable Birch, a graphic designer (and Barn Hammer’s co-owner), the idea of brewing all started about four years ago when her fence-building, handyman husband Tyler Birch started brewing beer out of the basement of their Wolseley-area home. After realizing that his homemade brew was actually really tasty, it really wasn’t much of a leap to deciding to brew beer for a living. Of course there was still a lot of very hard work to follow! Fast forward two years, and Barn Hammer Brewing is one of Winnipeg’s top brewing companies and taprooms, featuring five signature and eight seasonal beers on tap.

Found on the corner of Wall Street, visiting Barn Hammer Brewing is an experience in itself. The taproom is open concept, with high warehouse-style ceilings, lovely greying barnwood accents, locally-made vintage light fixtures and not a single television screen in sight! The lack of television is something which owner Sable thinks is important in this age of constant technological gratification. In response to those who feel the need for entertainment, Barn Hammer offers a variety of board games which you can play with your kids (kids are welcome!), friends, family, or engage other customers and make new friends!

Twice a week, Barn Hammer brews a “full brew”, which yields around 1,800 litres of beer. The brews are either kept to serve at the taproom or shipped out to the Liquor Mart or one of over 70 restaurants which serve Barn Hammer’s beer. For those wanting to catch a glimpse of how the beer-making process works, at the back of the taproom there are several large glass windows through which you can see the hustle and bustle of the brew masters, the enormous metal brew kettles and all of the fancy gauges, plumbing and piping required to keep the brewery rolling along. 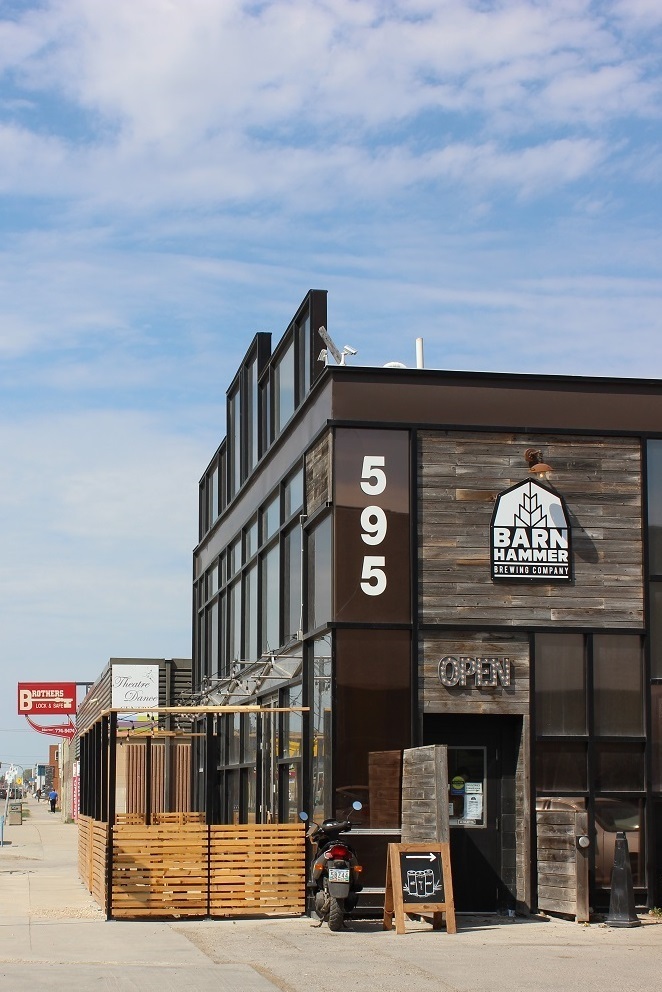 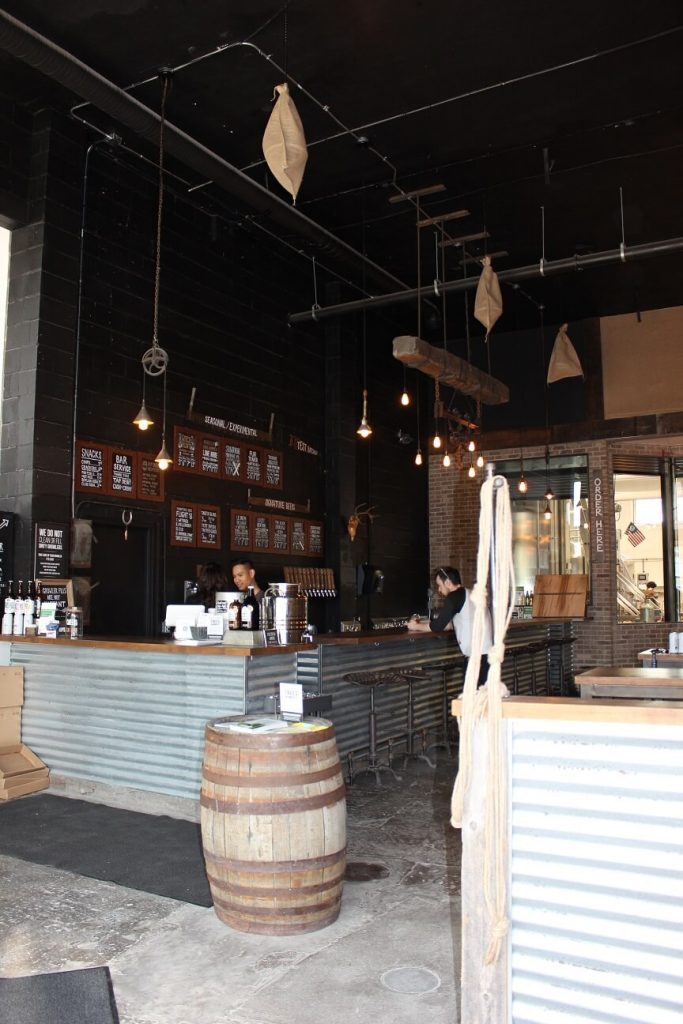 Barn Hammer is on the leading edge of the craft brewery renaissance in Winnipeg. Three years ago, a place like this wouldn’t have been possible due to legislation which prevented breweries from serving their beer on-site. Barn Hammer was one of the first craft breweries to take advantage of new legislation to allow breweries to serve beer straight to you in-house.

The operation has grown by leaps and bounds in the few short years it has been open, Sable intends to keep Barn Hammer true to its roots and remain a small community brewery. According to Sable, most of Barn Hammer’s customers are community members who will often fill up their growler (a take-home beer container), pick up their daily bread at nearby Sleepy Owl Bread Co., and head home on their bike after a day at work. 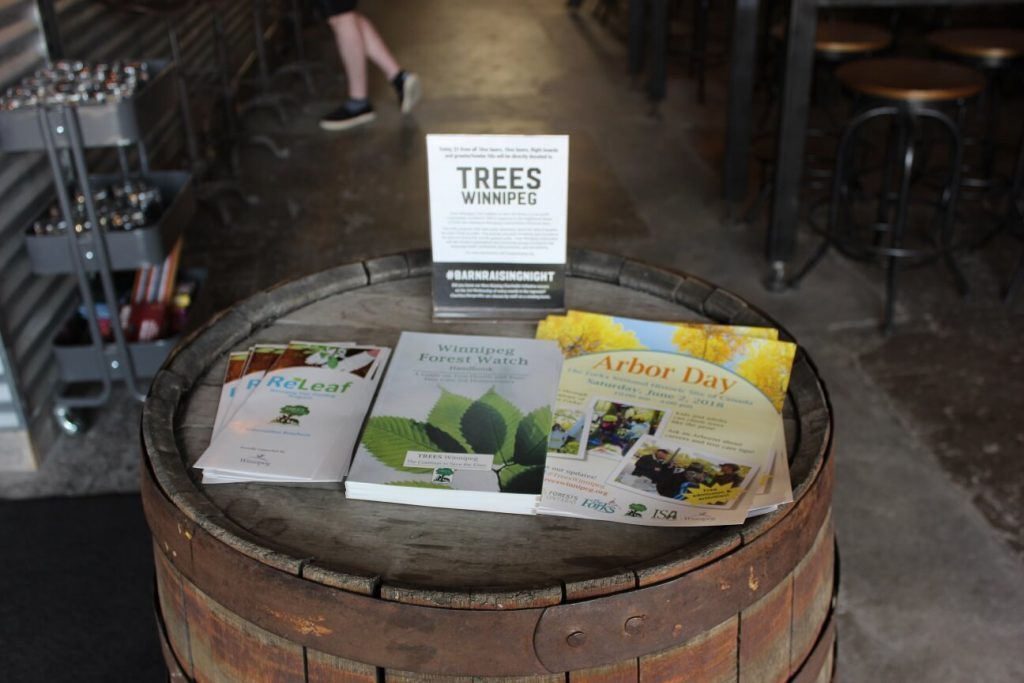 Barn Hammer reinforces the value of community support by using local ingredients including strawberries from Stephenfield, Manitoba, and hops from Winnipeg’s own Prairie Gem Hops. The couple also chooses to give back to the community by hosting ‘Barn Raisings’ on the third Wednesday of every month. Each Barn Raising a new charity is chosen, and one dollar from every sale goes towards that month’s selected charity. Past charities have included everything from the Rainbow Resource Centre to Winnipeg Pet Rescue Shelter. Last month, the selected charity was Trees Winnipeg.

It’s obvious that Barn Hammer Brewing’s connection to Winnipeg and the West End runs deep. You can try one of Barn Hammer’s brews by either visiting their taproom or your local Liquor Mart. If you would like a more in-depth visit to Barn Hammer and to learn more about their history, feel free to join us on one of our weekly West End Artisan Tours beginning next month!