A West End Business On A Roll

A West End Business On A Roll 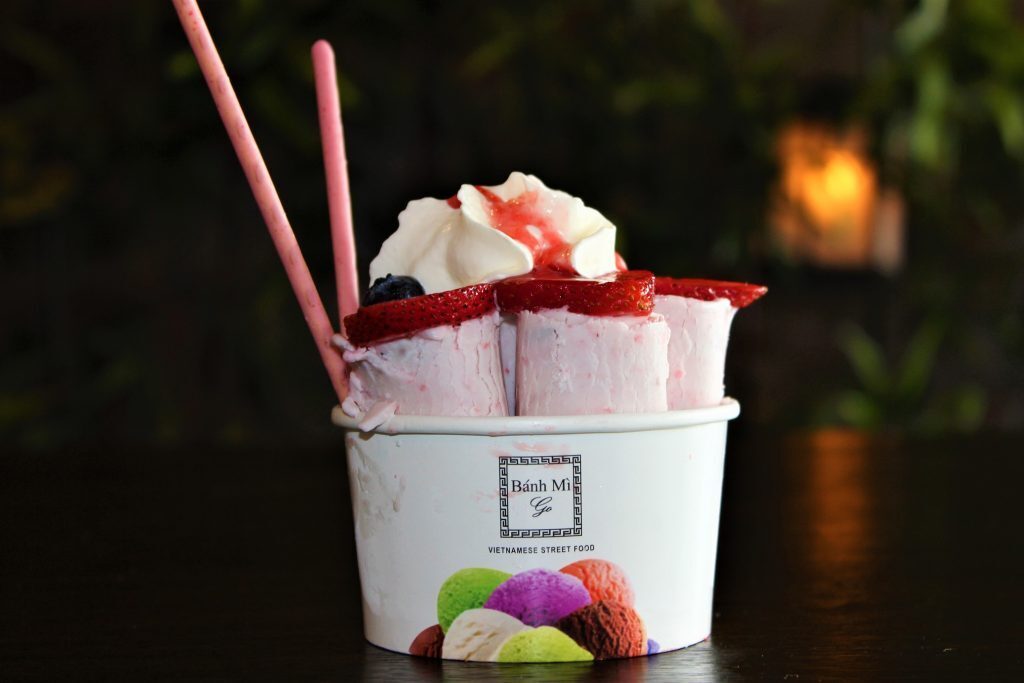 So how do you like your ice cream? Soft? Hard? Served in the mouth of a waffle fish? Or what about rolled? Vietnamese rolled ice cream, a recent trend taking social media by storm is changing the taste and artistry of ice cream as you know it. Instead of the traditional smooth creamy deliciousness that is ice cream, rolled ice cream is a unique type of made-to-order hard ice cream that’s intricately rolled, served in a cup, and covered in all sorts of toppings like fresh strawberries, blueberries, Oreo cookies or toasted marshmallows. For many cities, rolled ice cream is a brand new treat, but here in the West End, Rollesque Roll Up Ice Cream’s owners Heather Vu and Tom Hoang have been dishing out this summertime treat for over two years. 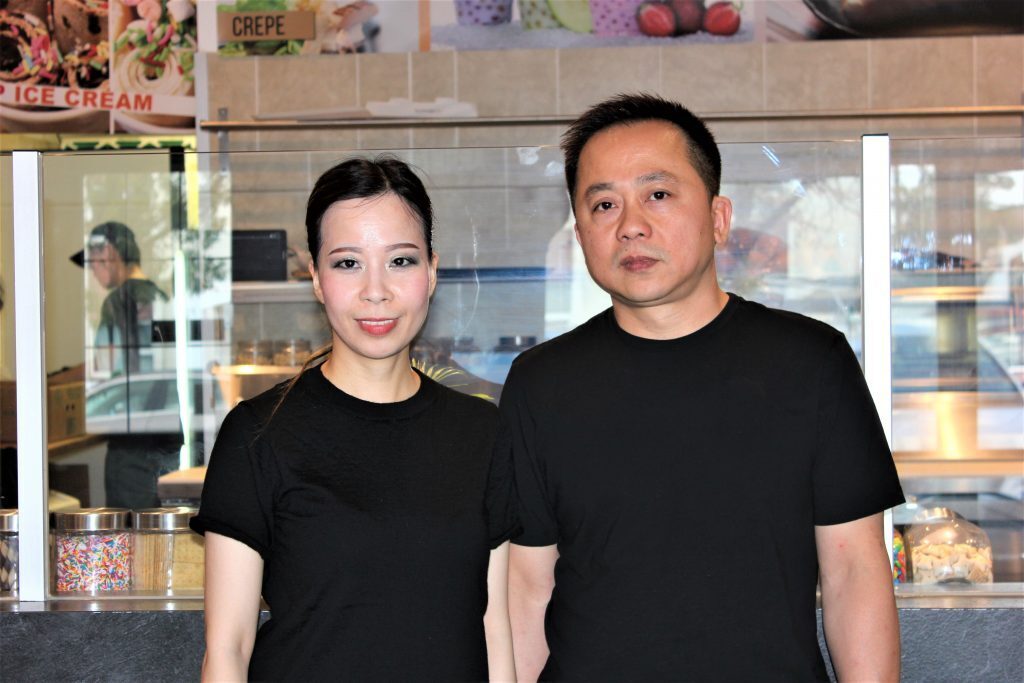 For Heather and Tom, the restaurant industry isn’t exactly a new frontier. In fact, they’re two of Winnipeg’s top restaurateurs best known for running Pho Hoang, a West End restaurant that merges authentic flavorful Vietnamese food with Winnipeg’s eclectic West End community. Pho Hoang opened nearly a decade ago when the already restaurant savvy couple moved from Vancouver to Winnipeg. Having gained experience working at and owning restaurants in Vancouver, it was only natural for the couple to put their culinary skills to good use in Winnipeg.

In preparation for the monumental task of opening their own restaurant, the couple travelled the backroads of Vietnam in 2008 from its northernmost point to its southernmost point in search of distinct Vietnamese flavours and inspiration for their dishes. While in Vietnam, Heather says she and her husband tried all sorts of scrumptious Vietnamese fare, but she says nothing was as satisfying as cooling off in the tropical heat with what street vendors called stir fried ice cream (AKA rolled ice cream)! For Heather, the unique take on a classic treat was so captivating that she knew she needed to bring it back to North America. 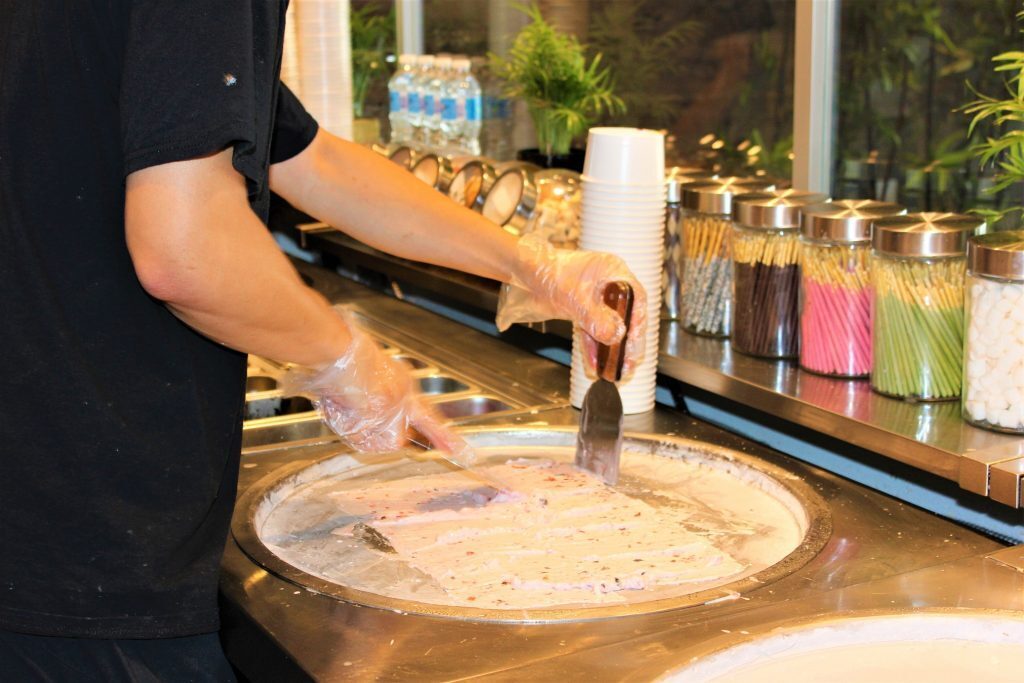 The ice cream is rolled into delicate curls using metal paddles similar to ice scrapers that you use on your car windshield during the winter.

After their trip to Vietnam, Heather and Tom returned to Winnipeg and opened Pho Hoang. As anyone who has opened a restaurant knows, getting one going is no small task so rolled ice cream had to be shelved… until 2016. Two years ago, Heather and Tom finally had the time on their hands to conceptualize the new business. At first, Heather admits they were hesitant to open up an ice cream shop in Winnipeg- a city best known for its bone-chilling -30°C winters. That’s why when they first opened, they went by Banh Mi Go and opted to serve banh mi sandwiches in addition to ice cream. However, as the popularity of rolled ice cream exploded, the couple agreed to change the name to Rollesque Roll Up Ice Cream. 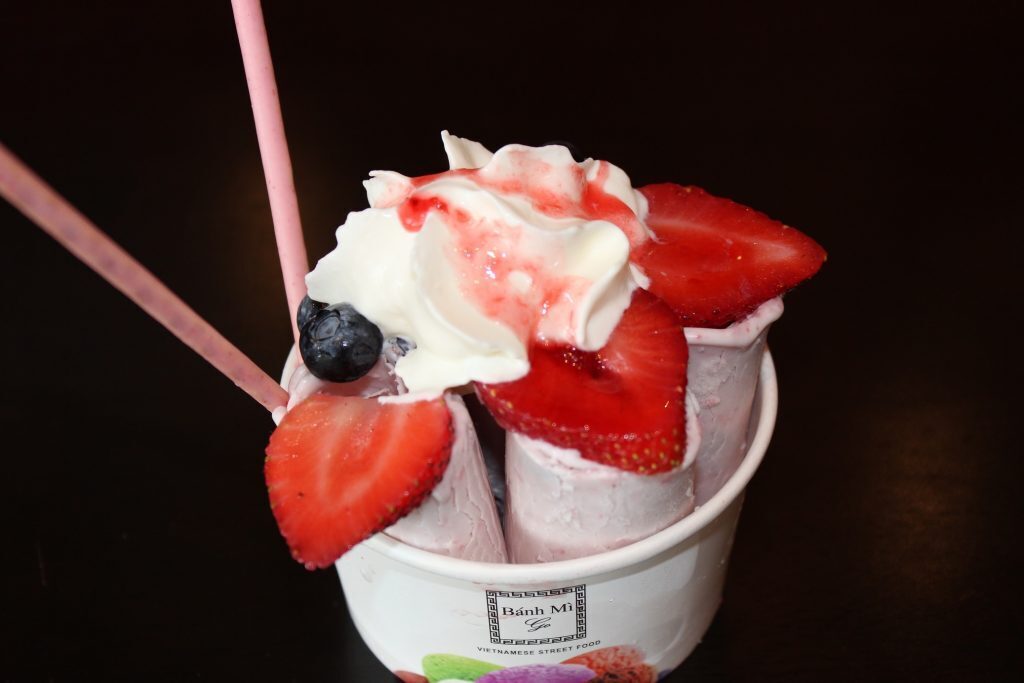 The Supreme Berry is a delicious mixture of ice cream with fresh bits of blueberry and strawberry, topped with strawberries, blueberries, whipped cream and strawberry Pocky sticks.

Having been Winnipeg restaurateurs for nearly a decade, Heather and Tom have made the West End their home, with both Rollesque and Pho Hoang located next door to each other. Heather makes it clear that it’s very important for them to stay in the West End.

“We want to stay here because we want to support the multiculturalism of the area,” said Heather. “We’ve also put a lot of work in here. We started with just a few regular customers coming in every day and now we have people from all over coming to try our food.”

So, the next time you’re in the West End and have a hankering for ice cream, no need to be vanilla… be bold and go rolled! Offering Western and East Asian-inspired flavours, Rollesque has ice cream that everyone can enjoy- both when you see it and when you eat it!

How is rolled ice cream made? 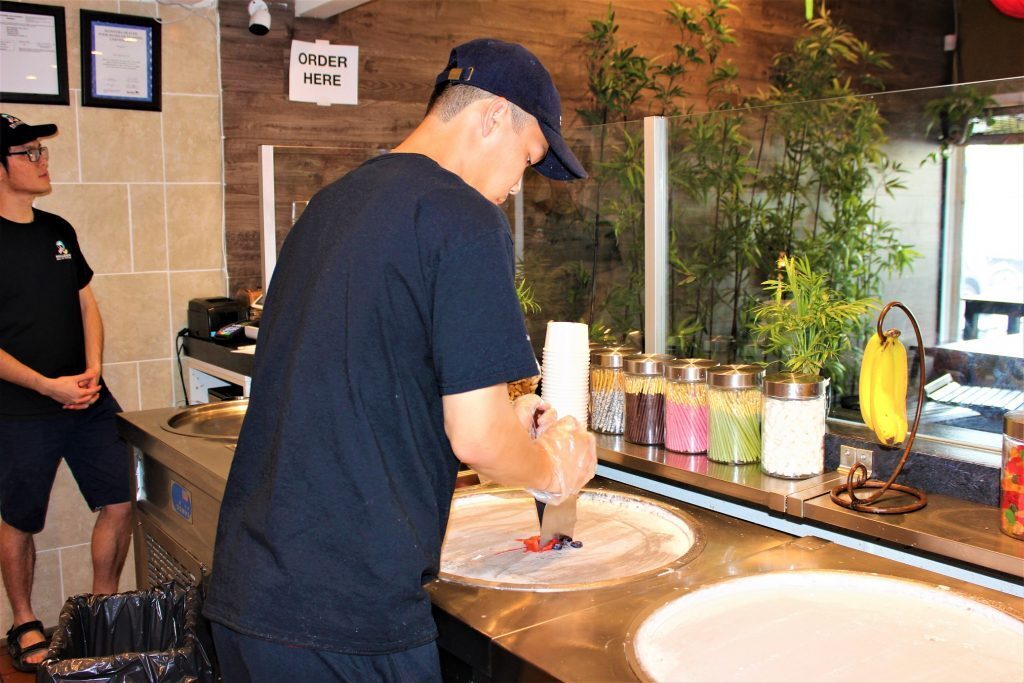 Fresh blueberries and strawberries are being chopped to act as the base for the ice cream.

According to Heather, traditional rolled ice cream is made by street vendors in Vietnam using ingredients such as red bean, matcha and sesame seeds for the base flavour. Everything is placed onto a cold stone (a large metal shelf cooled to below freezing) and a milk and cream mixture is poured over top. Stir fry techniques are then used to chop and work the ingredients into the dairy mixture until fully frozen. Once frozen, the ice cream is spread into a large rectangle which is then delicately scraped into perfectly circular rolls and topped with tropical fruits including jack fruit and durian. Fortunately, if red bean or sesame flavoured ice cream isn’t exactly your jive, Rollesque offers plenty of North American classics like Supreme Berry, Firework (mixed berries), Ferre-roll-rocher, and many other crave-worthy flavours too!

If you want to learn more about rolled ice cream or see how it’s made, click here!

Joe Kornelsen
Latest in the West End,News,Spotlight On
No tags.
Comments Off on A West End Business On A Roll
Share