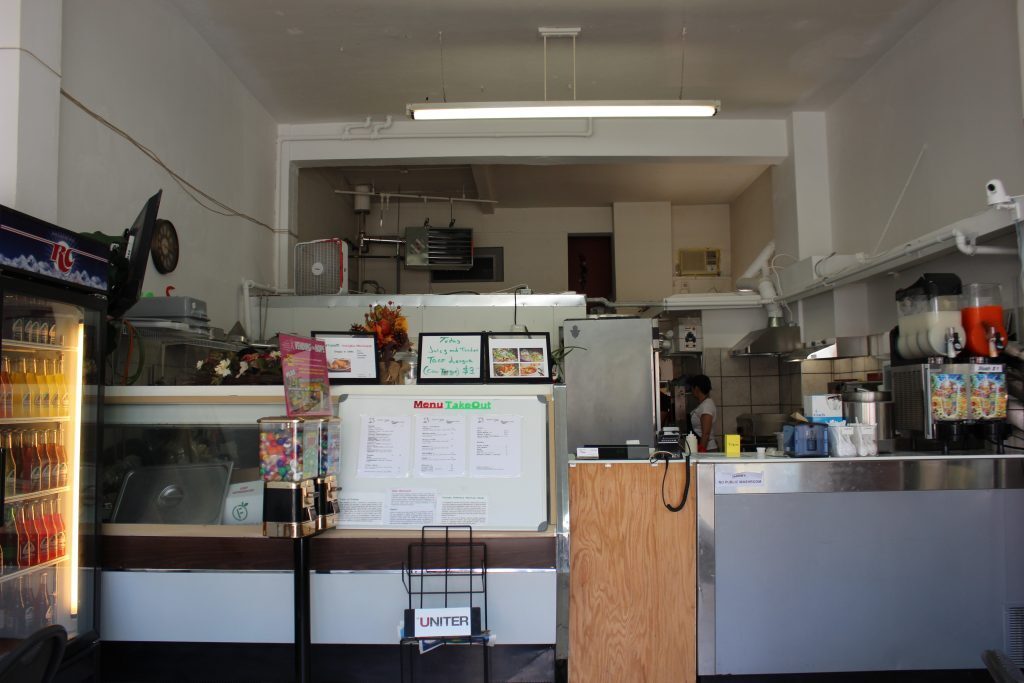 Did you know that Sargent Taco was once home to the Vietnamese restaurant Khanh Hoa? If you want to try Khanh Hoa, it’s now located at 834 Notre Dame, across from the HSC.

If you’ve wandered down Sargent Avenue recently, you may have noticed Sargent Taco Shop, a tiny, bustling restaurant that’s dishing out the most authentic tacos in Winnipeg. Servings are tapas-sized and owner Carlos Bosque uses the term antojitos (translates to little craving) to describe the dishes. Bosque characterizes his dishes as “full-flavour Mexican street food” and uses non-traditional ingredients including pineapple and pumpkin to take his cooking to a fresh and innovative frontier! However, if you would’ve asked Carlos two decades ago what he’d be doing in 2018, it’s improbable that his answer would have been running a successful taco shop on Sargent Avenue. In fact, it’s highly unlikely that at the time Carlos would’ve even fathomed living in Canada… let alone being a prosperous entrepreneur.

Born and raised in Mexico City, Carlos was always ambitious. When economic improvement was moving too slowly in Mexico, he began looking toward other places to advance his career and began considering emigrating to Canada. That’s when he stumbled upon the Aerospace Manufacturing program offered at Red River College. Carlos, who had always taken an interest in cars, thought that this sounded like the perfect program from him. That’s why in 2002, Carlos applied and was accepted to the program. 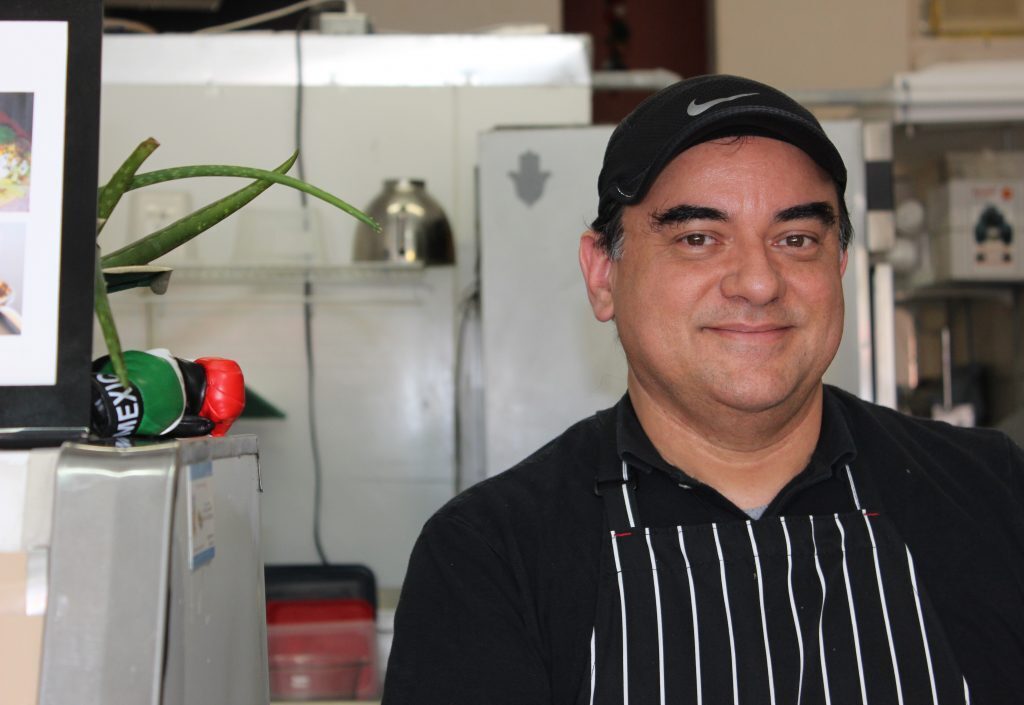 Because there were few students and lots of jobs in the aerospace manufacturing industry, Carlos quickly secured a job at Boeing and applied for and received Canadian citizenship. And having accomplished everything he had set out to do, Carlos prepared to enjoy his life in Canada building planes….

…but there was one little problem. Every time Carlos went out to eat with his family at one of Winnipeg’s Mexican restaurants, he found that there was something not quite right. He was constantly wondering: “why don’t things taste the same here as they do in Mexico?” 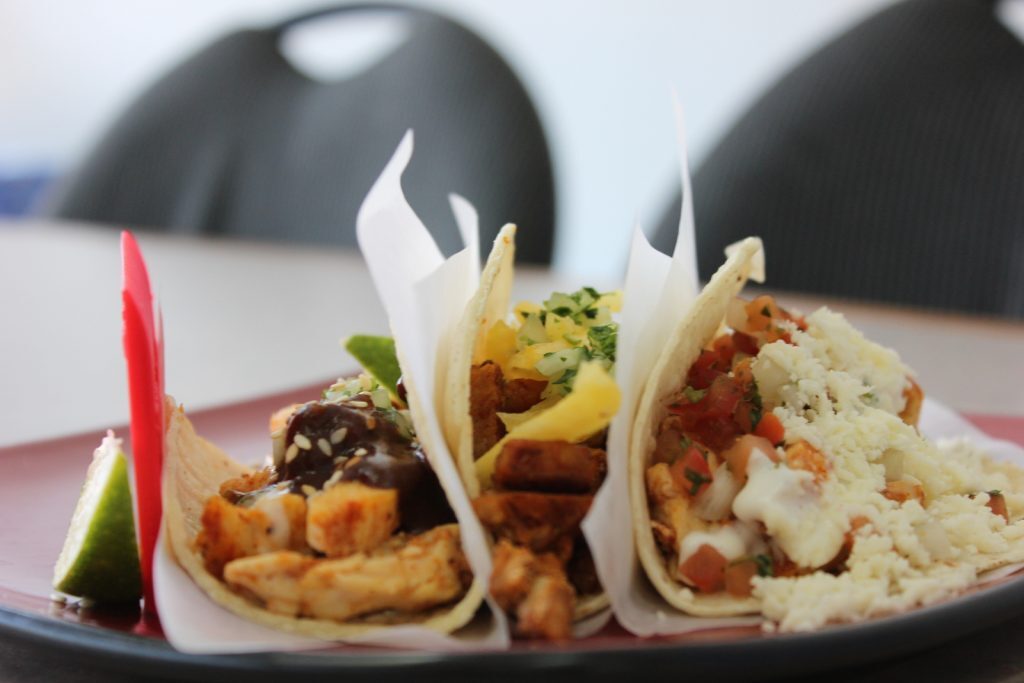 Here are three of Sargent Taco’s classic tacos from left to right. The Chicken Pipian garnished with sesame seeds, the famous pork Pastor with fresh pineapple and cilantro, and a grilled chicken taco with pico de gallo, cream and panela cheese.

Finally, he just couldn’t take it anymore. Realizing there was a niche market for authentic Mexican cuisine using authentic Mexican ingredients, Carlos set about rearranging his life plan.  Carlos left Boeing and opened Sargent Taco Shop in September, 2017. Along the way, Carlos admits that he’s run into some bumps, including finding panela (a white queso unique to Mexico) in Canada, but overall he’s quite proud of all that he’s accomplished. For example, Sargent Taco Shop’s signature taco, the Pastor, a pork taco that fuses Middle Eastern shawarma with Mexican spice blends has garnered gustatory prowess and serious foodie attention.

To Carlos, providing an “open kitchen” experience where “people can see what they are going to eat” is of paramount importance. To do this, Carlos maintains a clean, organized and fully stocked kitchen — which is why he arrives at 7:00 AM and leaves well after 10:00 PM every day. This shouldn’t come as a shock since everything served at Sargent Taco Shop is homemade (even the beans don’t come from a package) and carefully curated to have specific flavour palettes ranging from bright and spicy to subdued and sweet. 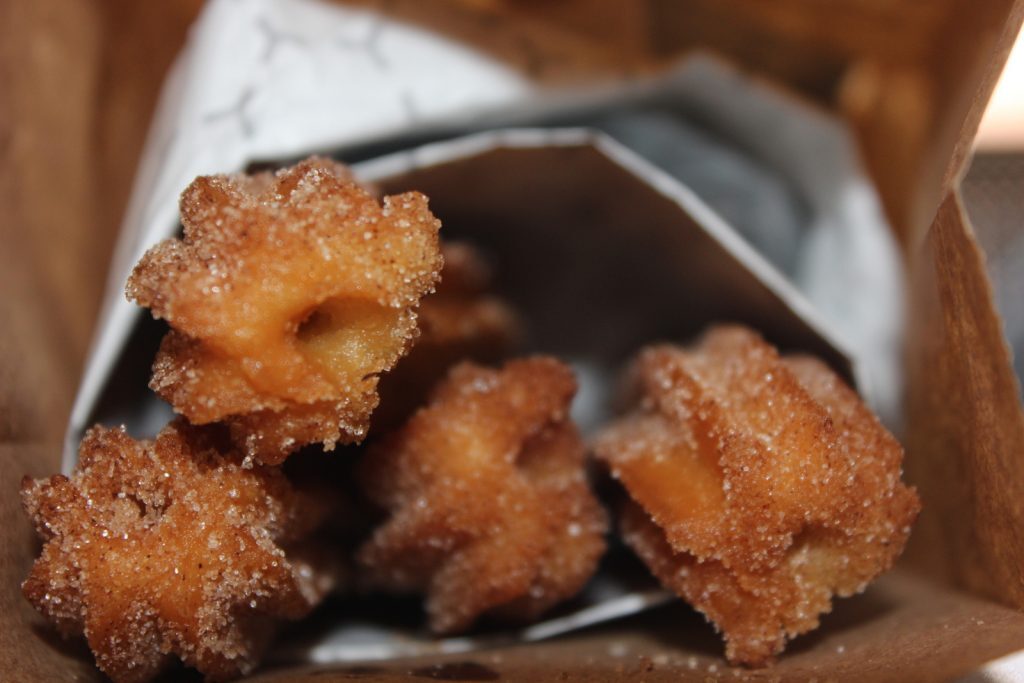 What’s a better way to end a meal than with some delicious and nutritious churros. Carlos is always tweaking the recipe to maximize their flavour.

Carlos admits (like many new entrepreneurs) that he’s often very tired and even laughs about having fallen asleep while watching a movie last week. But to him, this whole journey from Mexico to airplane manufacturing to restaurant has been entirely worth it. Carlos now has new hopes of expanding Sargent Taco Shop’s menu to include enchiladas and even hints at the possibility of opening a second location.

If you would like to visit Sargent Taco Shop and other West End restaurants, join us on one of our West End Restaurant Tours, which you can be easily booked by clicking here.